AGDisplays has been working with Military, Aerospace and other rugged industries since our inception in 2007. We provide military standard night vision compatible display integrations for extreme rugged and all-weather environments. Our solutions are ideal for environments that might need to perform in both low-light and high bright settings.

Exploring night vision solutions involves reviewing light dimming, low nit capabilities, LCD readability and real-time compatibility with other night vision equipment. Each LCD design is unique to the customer based on project requirements; our team is careful to evaluate each aspect of our night vision solution and adjust accordingly. We integrate high quality components that allow flexibility in function so that your design integrity is upheld, and your specifications are enhanced.

Our goal is to maximize your display’s lifecycle in the field, so our team considers the strengths and limitations of each component within the overall build. While we always strive to ruggedize every aspect of your project, the reality is LCD parts may fail or wear down over time. For these projects, we provide customized military and industrial repair programs that help you with LCD maintenance, repair and replacements.  Learn more on our Repairs website, which is dedicated to the focus of the repair process.

Many applications require just the opposite capability in addition to the aforementioned functions. AGDisplays brings the best in low-light solutions, paired with high bright performance, all in the same efficient and rugged LCD design.

AGDisplays has color TFT display models that feature Night Vision Imaging System (NVIS)-compliant LED backlighting system. Night vision imaging systems (NVIS) are systems that use image intensifier tubes to produce an enhanced image of a scene in light conditions too low for normal navigation and pilotage. Our backlighting system is designed to allow excellent readability in high ambient lighting, while also providing a secondary mode in which the panel's illumination is NVIS compliant.

Our Dual Mode backlighting system consists of two backlight sources that operate independently of each other. The first light source is bundled; and its configuration allows for a rugged and flexible design that withstands extreme shock and vibration. With the installation of our Generation 6 high bright LEDs, panel readability and clarity in outdoor light is maximized.

The second light source is an NVIS compliant light system that can have Class A or B filters. Our dimming LED controllers provide full control on how low your display emits. All optical components fall within military standards.

In night mode, brightness is dropped to less than 1 nit, and light is filtered to allow compatibility with night vision imaging systems. Our LED backlights are made of durable material and offer anywhere from 10,000 to 100,000 hours in operation life. This secondary backlight consumes less than one watt of power. The NVIS backlight remains unaffected by extremes in humidity (0% to 100%) and in temperatures ranging from -40° C to 85° C.

The dual mode NVIS compliant backlights are thin, typically 0.068 inches thick or 1.7 mm and can be constructed even thinner if need be. NVIS-compliant dual-mode backlight provides enhanced unit life and reliability, plus a dimming capability ranging from full brightness to almost zero nits. 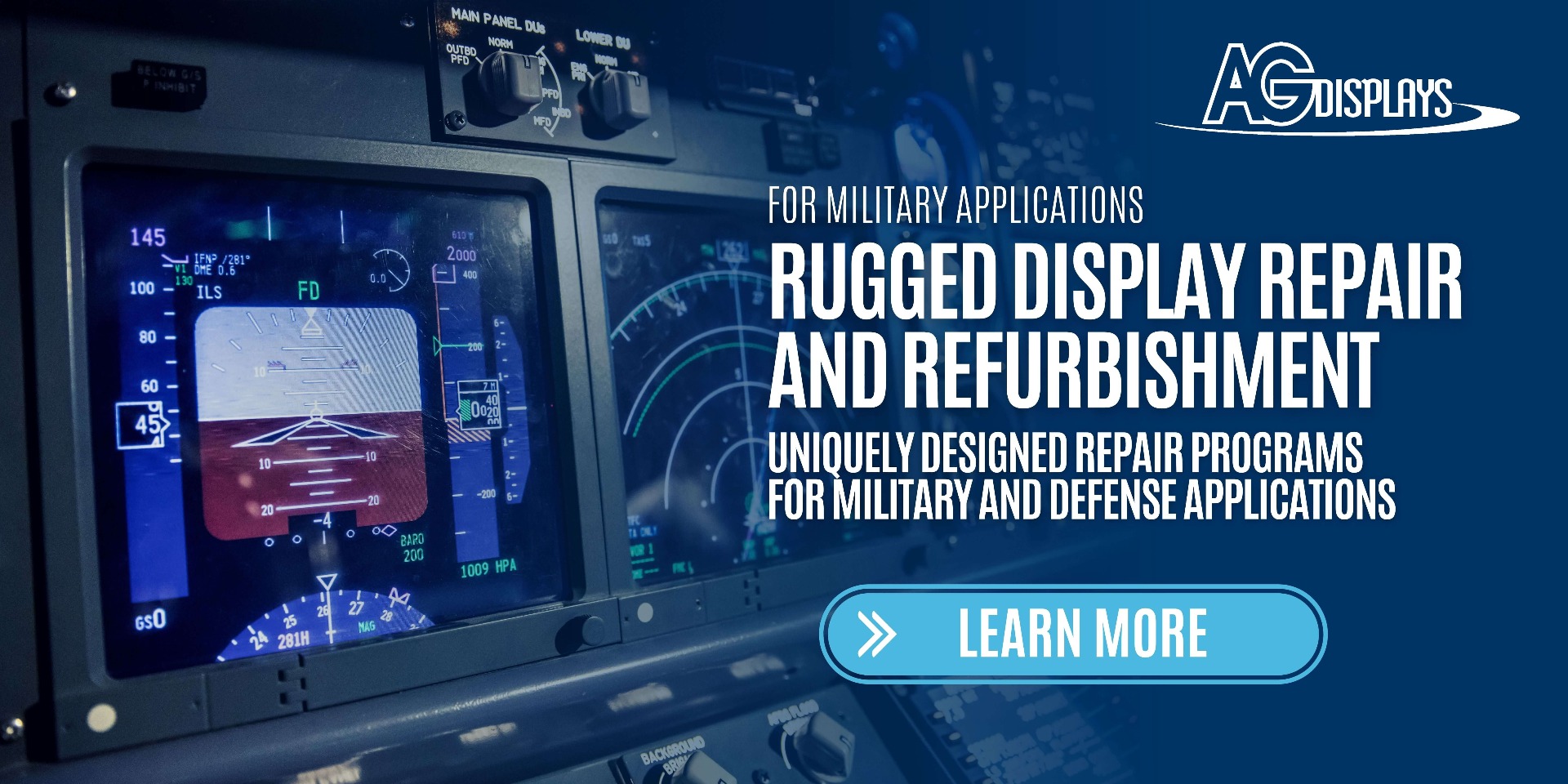 AGDisplays offers an NVIS filtering material for devices not looking for an active enhancement. Our polymeric material has been integrated and deployed in numerous military applications.

This solution provides an impressive level of absorption in the near-infrared and stability under solar and temperature exposure, with minimal impact to the visible spectrum. This solution offers a passive installation with safe removal.

In the electromagnetic spectrum, our eyes only respond to wavelengths between 400 and 700 nanometers (nm), which we normally experience as colors (Figure A). The less light, however, the less we distinguish color and detail. On a dark night, we lose color perception entirely, and objects become shadowy, somewhat brighter or dimmer shapes. 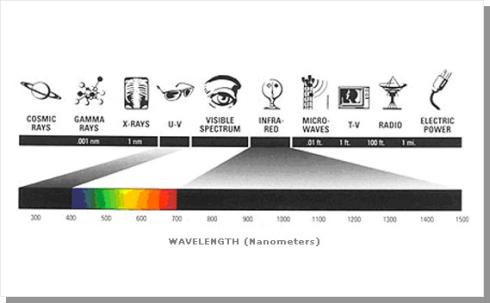 There are two ways of improving night vision. The first is to increase the amount of light reaching the eye, as with a telescope or flashlight. The second is through light amplification, by creating a visible, phosphor-screen image from normally imperceptible radiation, as in a night vision imaging system (NVIS) or forward looking infrared (FLIR) camera.

An NVIS usually looks like a pair of goggles or binoculars, is worn by the viewer, and responds to visible and near-infrared wavelengths up to 930 nm. FLIR is built into aircraft, with sensors below the nose cone and a display screen in the crewstation. It responds to long wavelengths in the 800-1600 nm infrared range, forming a visual representation of heat. Compared to NVIS, it has two main disadvantages; it doesn't track well with the pilot's head movements, and it is not real-time imaging. This section deals only with NVIS and NVIS-compatible lighting.

Besides perceiving only one part of the spectrum, our eyes respond to some wavelengths more intensely than others. For example, we see green light as much brighter than the same amount of red light. In daylight, our visual response describes a bell curve-known as the photopic or standard observer curve - that peaks in the green area, at 555 nm (Figure B). When our eyes adapt to the dark, their response curve shifts towards blue, and is known as the scotopic curve (Figure B). 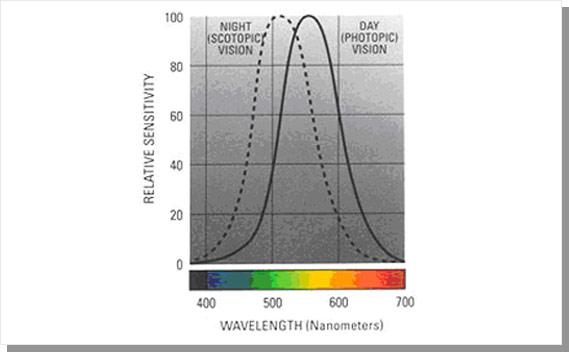 Figure B. Human Visual Response At Night (Scotopic) And In The Day (Photopic).

Just like the eye, every type of NVIS has a response curve describing its sensitivity to different wavelengths. Early forms of NVIS were more sensitive to visible light than to IR. More recently, Gen 3 NVIS was developed with greater response to IR, in both relative and absolute terms.

The response or sensitivity of NVIS to IR makes it far more useful for night vision than a device that only amplifies visible light. At night there is much more available IR than visible light (FIGURE A). Also, many materials - foliage, concrete, or stone, for example - reflect IR more efficiently than they do visible light. Foliage, in particular is such a high reflector of red and IR that is our visual sensitivity for red were higher, trees would appear red, not green (FIGURE C). 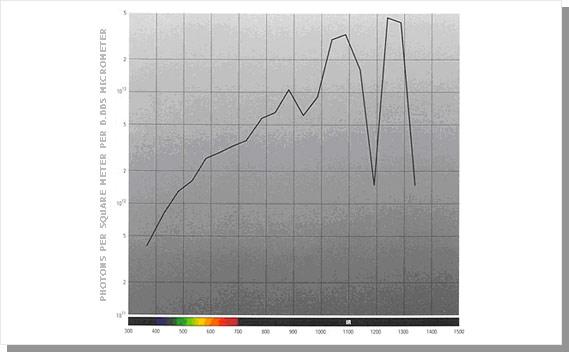 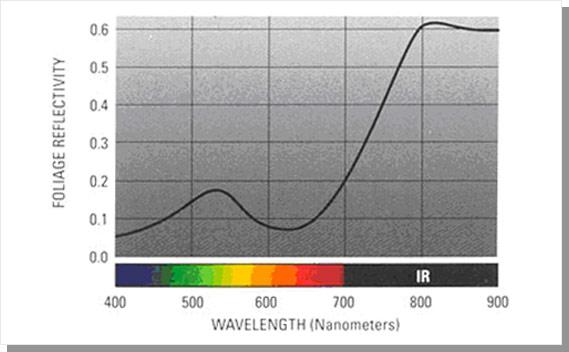 A pilot flying with NVIS must be able to read the illuminated displays in the crew station with unaided, normal vision. Likewise, an infantryman must still be able to read and operate communication or control equipment. Displays must be visible to the unaided eye while emitting very low levels of IR. If a display emits small amounts of radiant energy within the response range of the IR-sensitive photocathode, it may degrade the performance by impairing the resolution or sensitivity of the imaging system.

NVIS-compatible illuminated displays do not interfere with NVIS and remain readable to the unaided eye. NVIS compatibility also means that enemy's NVIS system will find it difficult or impossible to detect the light source at a distance.

The success of an NVIS application depends as much on the performance of the NVIS'compatible displays as on the NVIS itself. A normal incandescent, EL (electroluminescent), or LED light source interferes with NVIS because it emits significant IR radiation within the response range of NVIS. This excess IR causes interference in several ways:

The AGC (automatic gain control) feedback circuitry optimizes the gain, or level of NVIS intensification. A sudden increase in radiant energy within the NVIS response increases the electron current flow in the intensifier tube. The AGC detects this increase and compensates by reducing the acceleration voltage, lowering intensification so that the phosphor image dims and loses contrast. This protects the NVIS user from being blinded and disoriented by the flash of an explosion or flare. As soon as the radiant energy decreases, intensification goes back up. AGC also increases intensification when ambient irradiation is low, as on a moonless night.

An unfiltered incandescent bulb being turned on nearby has the same visual effect through the NVIS as a flashbulb to the unaided eye, followed by loss of image definition and poor visibility. The goggles actually shut down after the initial burst. An improperly designed or manufactured NVIS-compatible display may still activate the AGC and reduce sensitivity and target resolution, or cause persistent ghosting or blooming.

Class A lighting components are compatible with NVIS using a 625nm minus-blue objective lens filter which results in an NVIS sensitivity. Standard AN/AVS-6 ANVIS are equipped with Class A filter. This filter is not compatible with red cockpit lights due to the overlap between the spectrum of red light and the sensitivity of Class A NVIS. 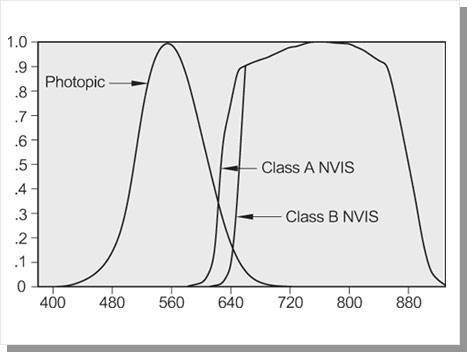 SPECTRAL RADIANCE, TYPE I CLASS A COLORS: FIGURE E shows the normalized spectral radiance curves for the Type I Class A colors of NVIS blue, NVIS green A, NVIS green B, NVIS white and NVIS yellow Class A. Also shown are the relative photopic response and the relative spectral response of the Class A NVIS. These are the only colors that are allowed in a Class A cockpit. 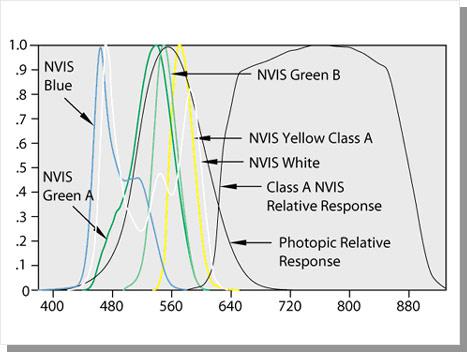 SPECTRAL RADIANCE, TYPE I CLASS B COLORS: FIGURE F shows the normalized spectral radiance curves for the Type I Class A colors of NVIS blue, NVIS green A, NVIS green B, NVIS white and NVIS yellow Class A. Also shown are the relative photopic response and the relative spectral response of the Class A NVIS. These are the only colors that are allowed in a Class A cockpit. 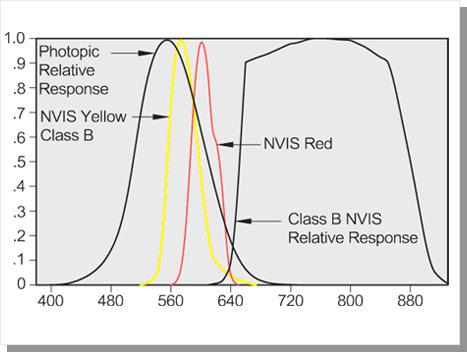 NVIS goggles consist of one, often two image intensifier tubes and look much like binoculars mounted to a head strap or a helmet. An NVIS intensifier tube (FIGURE H) is a vacuum tube device similar to a miniature video camera and screen packaged together. The sections in the intensifier tube are the: 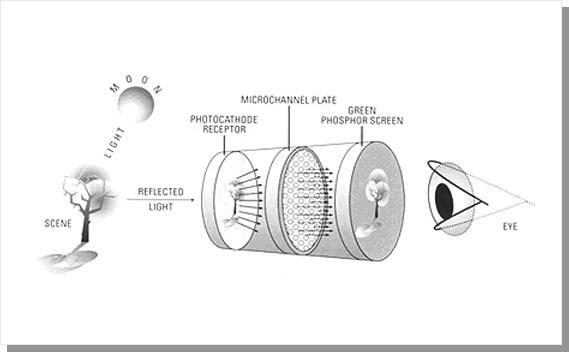 All three elements are packaged close to each other to minimize blurring of the converted visible image. An electron accelerating voltage is applied between each of the three stages to produce amplification and maintain image quality.

The two main types of intensifier tube in use are classified as Gen 2, which uses a multi-alkali photocathode, and Gen 3, which uses the far more sensitive gallium arsenide photocathodes developed in the 1970s. The improvement is obvious by comparing typical Gen 2 and Gen 3 response curves (FIGURE I). Gen 3 tubes cost approximately three times more than Gen 2, but their useful life is also three times higher. 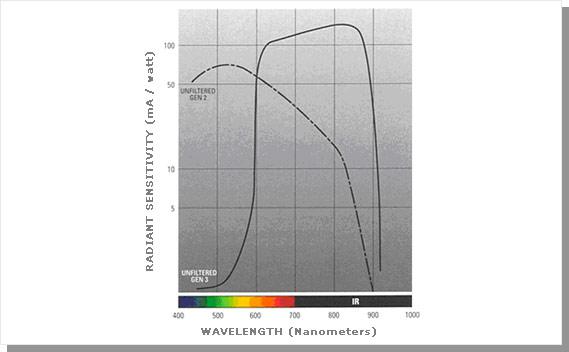