Depending on the touch technology, touch screens are capable of detecting touches made by a finger or hand, or other passive objects such as a stylus or a pen. A touch screen typically has three components: a touch sensor, a controller, and a software driver. There are multiple touch technologies on the market, each vary in characteristics and features: resistive, surface capacitive, projected capacitive, surface acoustic wave, and infrared. Without touchscreen technology, user speed and accuracy may be insufficient and confusing. AGDisplays designs compatible solutions for existing LCD designs or we also provide a new unit that is touch compatible. Many LCD panels are not equipped with a touch sensor. AGDisplays turns customer LCDs into touchscreens with the quick integration of a compatible touch sensor. We also perform repairs, replaces or enhances touchscreen technology. Why integrate a touch sensor into your display? 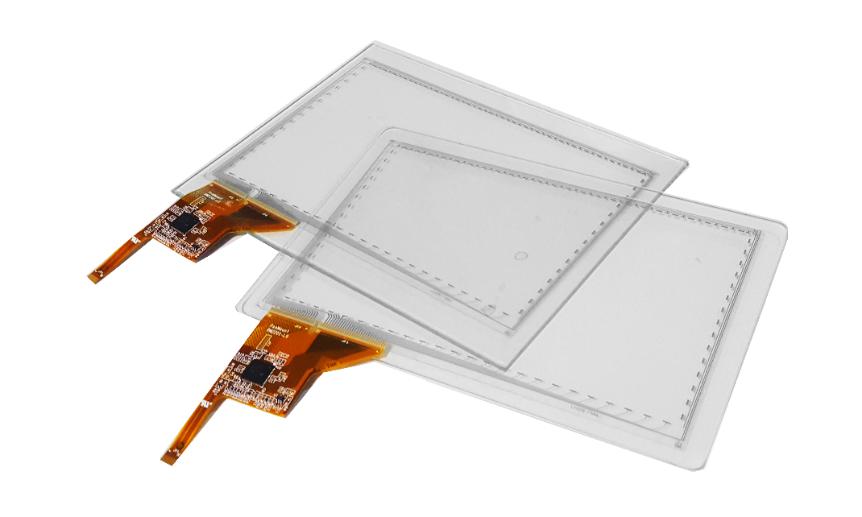 A resistive touch screen is made up of several layers. Two of these layers are electrically conductive and are separated by a narrow gap. When initiating a point of contact with a resistive touch screen, the stylus/finger creates pressure and contact between the resistive circuit layers, allowing for a complete circuit. If you’ve ever noticed, when using a resistive touchscreen, often it will not respond to a touch but rather it will respond to a touch with pressure. When applying pressure to the touchscreen, the top layer bends to touch the second layer, creating a point of contact. The point of contact acts as a pair of voltage dividers with connected outputs, which causes a change in electrical current and the panel can then identify the location of the touch.

There are a few different types of resistive touch screens, depending on how they are fabricated.

Benefits of a Resistive Touch Screen: 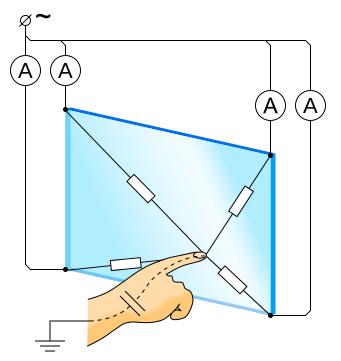 Very commonly used, this touch screen type is probably used in your smartphone or tablet. This touchscreen type may be built with single or multiple layers that are coated with a conductor, often ITO (indium tin oxide). A cover is added to seal the assembly from the environment. When a finger or stylus comes into contact with the touch surface, the electrical circuit is completed. And the touch screen sensors in the glass detect the location, due to the flow of current. There are two types of capacitive touch screens: surface capacitive and projected capacitive.

Surface capacitive technology is simple, giving the customer durability and lower cost. In this build, one side of the insulator is coated with a transparent conductive coating. Electrodes are placed in the four corners of the display that detect changes made by the touch of a finger/stimulus. A touch can only be detected when it is made with a conductive object such as a finger or hand. The protective coating on top of the conductive layer protects the touch screen from scratches and abrasions, as well as permits increased transmissivity. Surface capacitive touch screens have no moving parts and therefore considered a moderately durable build. 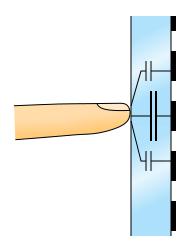 Projected Capacitive, or PCAP, touch screen technology features important advantages: high durability, superior optical clarity, and unlimited multi-touch capabilities. The PCAP is embedded behind glass for protection, allowing increased durability without compromising the integrity of the technology. These touch screens provide precise positional accuracy while also detecting multiple touches at one time. This build contains two types of electrodes, X and Y electrodes. These are laid out on separate layers, running perpendicular to each other. When a touch is created, the electrical field between X and Y change, and the sensors pinpoint the location of the touch. PCAP touch screens allow only finger-touch operation.

SAW technology incorporates ultrasonic waves (above the range of human hearing) that pass over the touch screen and when touched, registers the position of the touch through wave absorption. This is a perimeter-based technology, similar to Infrared technology; however, this technology uses sound instead of light to calculate a point of contact. A SAW is made up of transmitting transducers, receiving transducers, and reflectors. Transmitting transducers create the ultrasonic waves that move across the surface of the screen; these are reflected and are captured by the receiving transducers. The advantage of this touch technology is that it can be activated through a finger-touch, a gloved hand, or a soft-tip stylus. The technology uses clear glass, which allows for extra durability and an extended lifetime. This application is versatile; it is relatively easy to use this technology in a large size touch screen application.

Infrared technology relies on light-beam interruption, or “beam break,” technology to detect touch points on the touch screen. The display is surrounded by a frame which uses a light source (LED) on one side and light detectors on the other to create an optical grid across the screen. A touch is detected when an object touches the screen and the invisible light beam is interrupted. The loss of light at the point of touch, where X meets Y, determines the location of the touch. The advantages with this technology are touch screen precision, touch screen is sensitive to finger-touch or glove-touch and is resistant to electrostatic and magnetic noise. 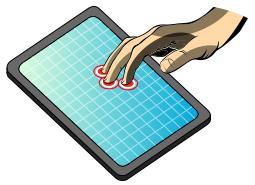 By Willtron This vector image includes elements that have been taken or adapted from this: Hands.svg. [CC SA 1.0 (http://creativecommons.org/licenses/sa/1.0/)], from Wikimedia Commons